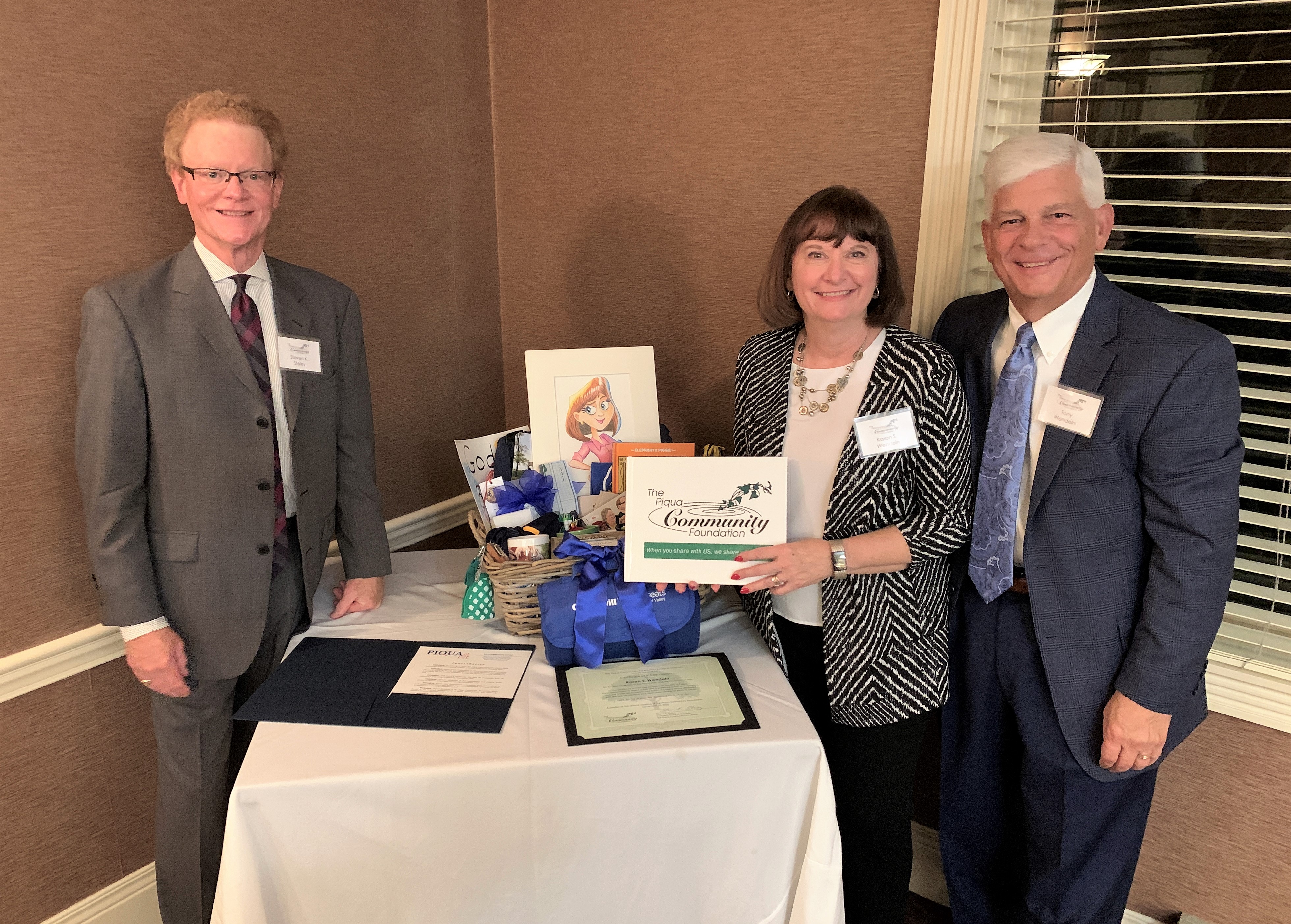 The Piqua Community Foundation Board of Directors and Life Trustees honored the organization’s retired executive director Karen S. Wendeln on November 10. The recognition was a part of The Foundation’s annual meeting, held in a limited capacity at The Piqua Country Club.

Wendeln became The Foundation’s first-ever executive director in January 2001 and she grew The Foundation from its infancy to a robust community foundation, Board of Directors President Steven K. Staley said.

“Karen has been the face of The Foundation for a long time and has grown the size and scope of the organization significantly,” Staley said. “Her retirement is truly bittersweet, and we wish her the best as she enjoys this next chapter of her life.”

Staley presented Karen with a basket of mementos collected from various community nonprofit agencies; a memory book filled with well wishes from family, friends and colleagues; a certificate entitling Wendeln to choose a tree to be planted at a Piqua city park in her honor; and a proclamation from Mayor Kris Lee declaring November 10 as Karen Wendeln Day in the City of Piqua.

Earlier in the year, The Foundation’s Board of Directors also established a donor advised fund for Wendeln to direct. She named the fund The Wendeln – First Director Fund and, together with her husband Tony Wendeln, matched the amount contributed by The Foundation to double the fund’s impact.

“I am blown away and truly humbled by the generosity and thoughtfulness of my friends at The Foundation,” Wendeln said. “Working with the board members, donors and beneficiaries of The Foundation has been my greatest pleasure in my time as the executive director. I will miss my interactions with them all but know that the friendships will continue on.”

Wendeln extended her thanks to all those nonprofits that contributed mementos for the gift basket and to The Foundation for the gifts in her honor.

The Foundation’s Board of Directors hired Michelle Perry at the start of the year to serve as the incoming executive director. Wendeln and Perry worked side-by-side from March through July 31, when Wendeln retired. She has remained on staff as a consultant, a role she will continue in through the end of the year.

All told, Wendeln will have served The Foundation for a full two decades.

She looks forward to soaking up time with her six grandchildren and traveling, when pandemic restrictions allow her to safely do so. She will also continue in her volunteer roles with Meals on Wheels, St. Mary Church, the YWCA and Girl Scouts.

Those wishing to share a note with Wendeln may send them to P.O. Box 226, Piqua, OH 45356 or kwendeln@piquacommunityfoundation.org.

The Piqua Community Foundation Life Trustees recognized retiring Board of Directors member Cheryl L. Burkhardt at the organization’s annual meeting on November 10. She served the organization for 22 years, including two years as the board president, and received a plaque in honor of her commitment.

In addition, the Life Trustees elected Beth H. Kazer to fill a Board of Directors seat vacated mid-term. Her service on the board began immediately and continues through December 31, 2022.

The Life Trustees also re-elected five incumbent directors and elected one new director (identified with an asterisk) who will serve three-year terms from January 1, 2021 to December 31, 2023:

To see the full Board of Directors list and learn more about The Foundation, visit the link below.